I’m now live streaming to Twitch and Facebook Live concurrently. I solo-ed Paperback last night and tonight we played the new game from AEG, Santa Monica. Michelle and I really liked this one: it’s got a neat little spatial element to it, where you’re trying to line up icons in the right place as well as get your meeples to their respective spots. Here’s the replay from Facebook Live: 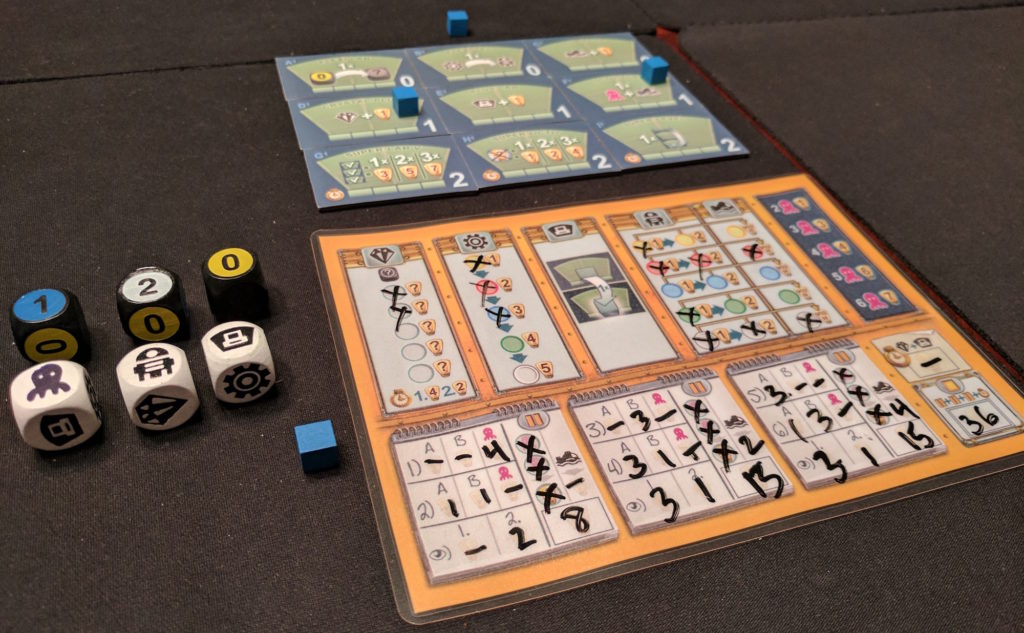 I had a great day today: my wife’s hula performance was excellent, as always, and our daughter was back from college and was able to catch the show. Then I spent a few hours at the inaugural Comic Con Revolution in Ontario, California, and had a blast amongst all of the cosplayers and comic book fans. I even managed to find an independent game publisher hawking his wares.

Finally, after catching the main event of UFC 211, I played a solo game of Octo Dice, which I wrote about for Geek & Sundry. It’s an underrated roll-and-write game from AEG, set in the Aquasphere world of Stefan Feld’s game. While it plays nothing like the original, it offers some fun changes on the Yahtzee formula. Here’s how I summed up the game on G&S:

Like the classic Yahtzee, players roll and write on their score sheets as they collect sets of particular items. However, after each roll, a player must “lock” two dice, meaning they can no longer re-roll them and must mark them on their score sheet.

Each die has a few icons and number and color combinations. These match up with the sets that players attempt to score such as crystals, research, labs, bots, and submarines. Players must also roll at least two octopods per turn or else lose two points.

It can be played solo, even though you lose the fun follow action from the multiplayer game. Still, it’s a quick roll-and-write and offers plenty of interesting decisions, due to the push-your-luck factor. Which dice do you keep after every roll and re-roll? It seems like every time I try to focus on a particular action, the dice rolls force me to re-think my strategy. I like that.

One thing I forgot to mention in my original article was the poor production of the dice. They’re light wooden dice and the painted icons rub off easily. It’s such a bummer because the score sheets were full-colored and double-sided; outstanding in every way that the dice were not. Perhaps that’s why Octo Dice has been overlooked. Replace the dice with big, chunky, King of Tokyo-style dice and I’m sure the game would receive the attention it deserves.