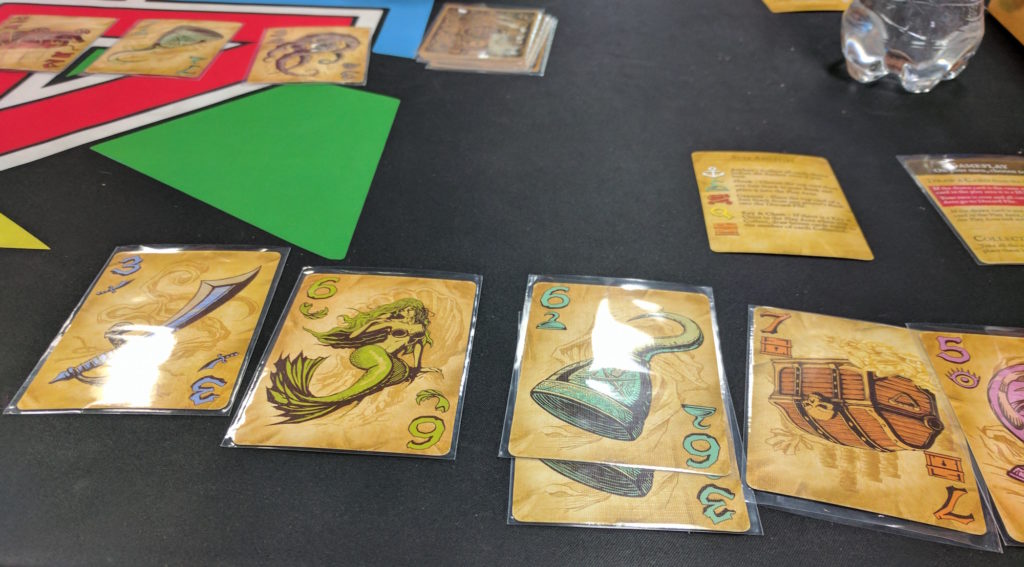 Tonight was another fine night of gaming with my Wednesday group, as I played Unlock!, Stone Age, Indigo, and my most recent purchase, Dead Man’s Draw.

A push-your-luck and set-collection game, Dead Man’s Draw is a fun filler for 2-4 players. The standard game consists of a deck of cards divided into 10 “suits” such as a sword, cannon, treasure chest, and other pirate-y items. Each card is numbered from 4-7 and contain a special ability that is triggered when it is revealed.

On their turn a player will reveal the first card, perform its ability, then decide whether or not to push their luck by drawing another card. If the card is the same suit (for example, a cannon has already been played and another cannon is drawn), then they bust and all cards are moved to the discard pile and their turn is over. Otherwise, the player may continue drawing cards until they decide to bank them, which will be how they score points.

The game ends when all of the cards have been drawn. Players tally up only the highest number of each suit then have in front of them; thus, if I had two cannons worth 7 and 5, I would only score the 7 (along any other suits I’d collected). Highest total wins.

I first played Dead Man’s Draw two weekends ago at Kingdom-Con with my buddy Rick. It’s my type of filler: easy to learn with some interesting decisions throughout the game. The push-your-luck mechanism is fun and should appeal to non-gamers and there are additional rules for some added depth, such as variable player powers and variant scoring.