It’s a good day when three of my favorite football teams play on the same day and all win. Actually, two play football (soccer) and the third plays American football. And there’s a fourth that’s my favorite soccer team (the LA Galaxy), but they weren’t in action today. Clear as mud? Good.

1. Manchester United. Thankfully, I didn’t have to wake up at 4:45am on a Saturday to catch the Red Devils. Their 8am game fit perfectly into my Sunday sports-viewing schedule, since it would be over just before the NFL games. Just like last week, the story of the match was Man U’s 19-year-old phenom Anthony Martial, who scored two goals in the 3-2 win.

2. FC Barcelona. They started off slowly, but Barca quickly turned their match against Ligante into a rout, 4-1. Messi missed a penalty kick! Of course, he also scored a brace, and Neymar also scored, so it was business as usual for the best team in the world.

3. Oakland Raiders. Their defense is a still a sieve, but credit Coach Jack Del Rio for having his team ready to play today. Last week was utterly dismal: a no-show for the new coach in front of the home fans. So today’s game was a pleasant surprise as the Raiders show heart and played good enough to beat the favored Ravens. I was hyped about Carr, Cooper, and Murray on offense before the season began. After week one, I was ready for another 3-13 year, but hopefully today’s game is a sign of better things to come. I still have my fingers crossed for 8-8, but the defense needs some help.

The 2015-16 Premier League season starts tomorrow, so for us soccer fans across the pond, that means waking up at 4:45am to watch the action.

I’m a Galaxy fan because I love all things L.A., but the MLS is still years away from competing with the European leagues. It’s nice to have the European stars on the downsides of their careers come over and build the MLS fan base, but watching the teams in the Premier League or La Liga reminds me why the sport is called The Beautiful Game.

It’s why Americans like me wake up before dawn to watch soccer.

When I’m not rooting for the Galaxy, I’m pulling for Manchester United. As someone who came to the sport later in life, I had to choose a team. It’s not like how I chose my basketball, baseball, or football teams; that was easy, since I grew up in L.A., which meant following the Lakers, Dodgers, and Rams (although once I saw the Raiders play, I immediately switched allegiances. This was made easier by the fact that the Rams abandoned L.A. for Anaheim, then the Raiders moved down from Oakland. Also, I was seven years old at the time).

So why Man U? My stepdaughter roots for Manchester United. Before I became her stepdad, I’d watch her play for her club and school teams. I learned about the sport so I would know what was going on when she played. I watched videos and learned the history of the league. I read the fantastic The Miracle of Castel di Sangro by Joe McGinniss.  I felt like a bandwagon fan when I started watching Man U, since they’re the most successful club in league history, but that wasn’t going to stop me from cheering for them.

And something funny happened along the way: I became a soccer fan.

It’s my favorite sport by far right now. I’ll never be a rabid Man U or FC Barcelona (my favorite non-American team) because I believe you have to live within the city where they’re located to truly feel the fans’ passion. I think of American football and the passion that it ignites among fans here in the States. Or how the city of Los Angeles gets into a frenzy whenever the Lakers are closing in on another NBA title.

But I love soccer. And I’m rooting for the Red Devils, bandwagon or not. 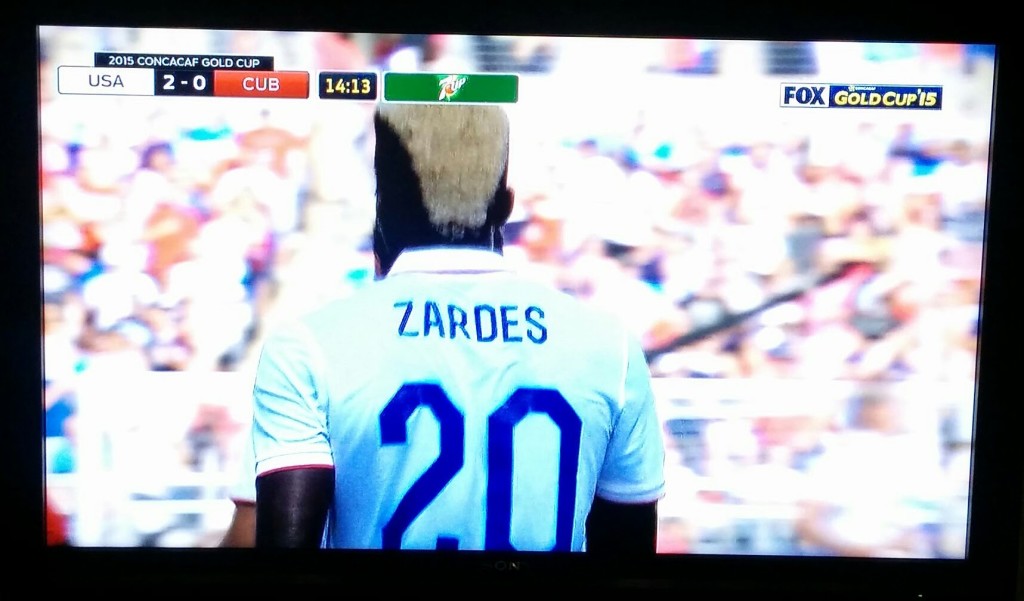 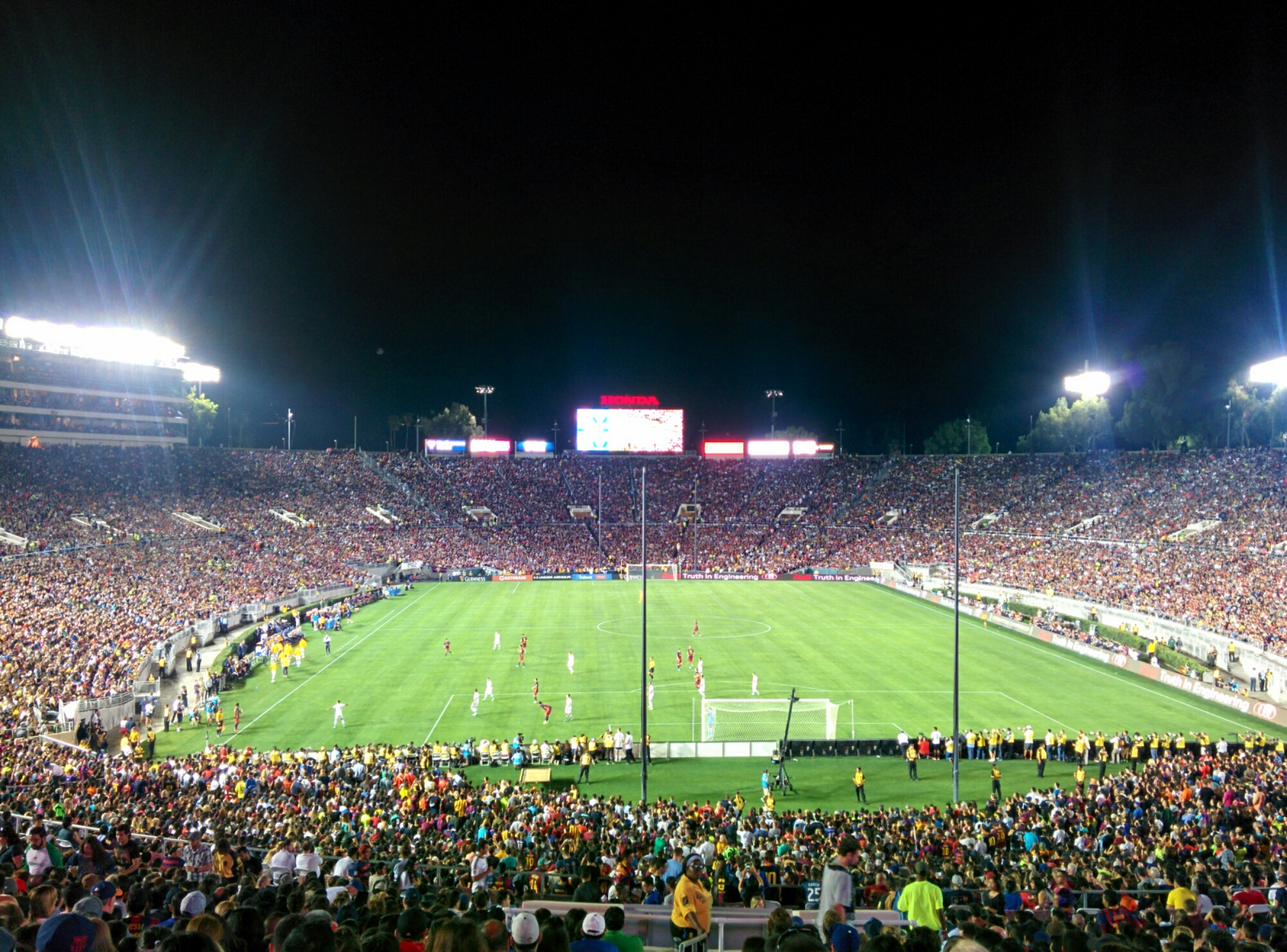 My view tonight: This is why it’s known as The Beautiful Game. 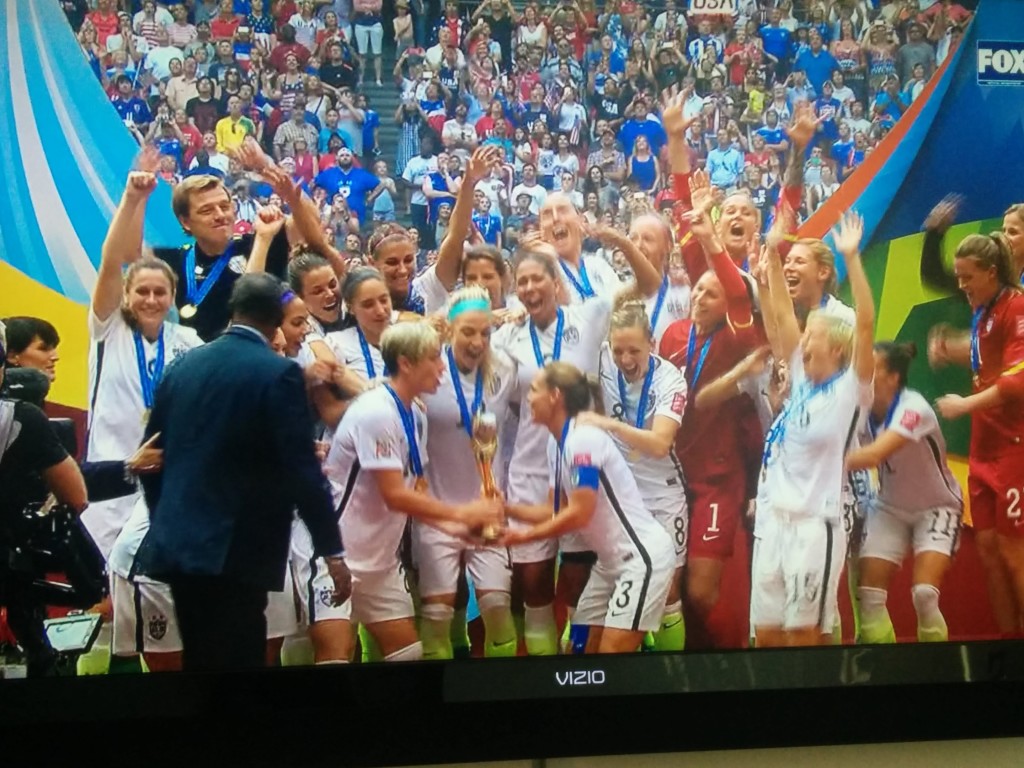 The first 16 minutes of today’s World Cup final was the reason why soccer is called The Beautiful Game: four goals for the Americans, a hat trick for Carli Lloyd (topped off with an incredible strike from midfield), and the team’s third World Cup title.

It was stunning, unbelievable, and awesome.

Not sure what else I can say about watching my country win the most prestigious futbol tournament in the world. I’ll just end with my favorite hashtag during international play: #OneNationOneTeam 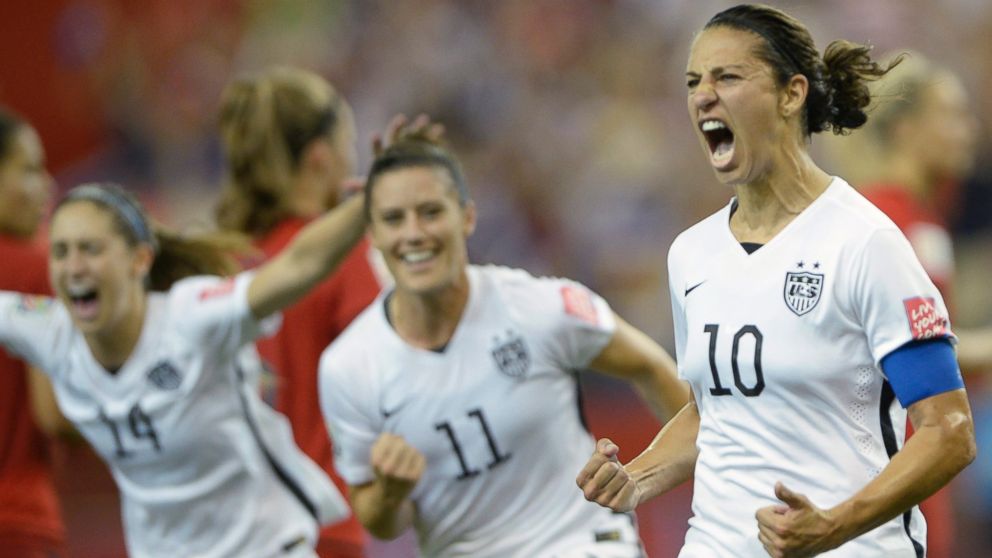 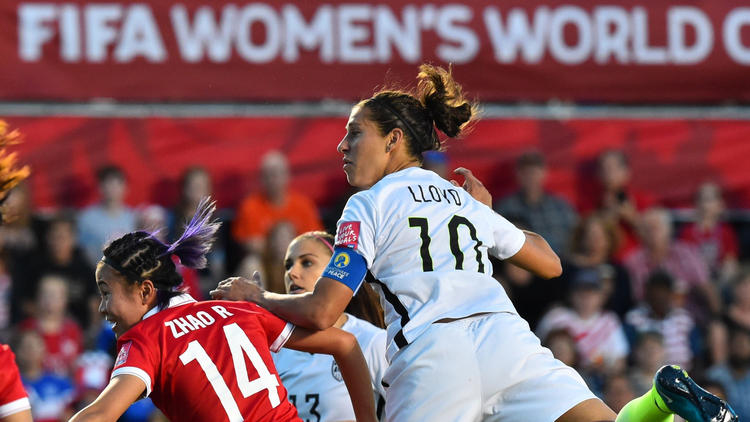 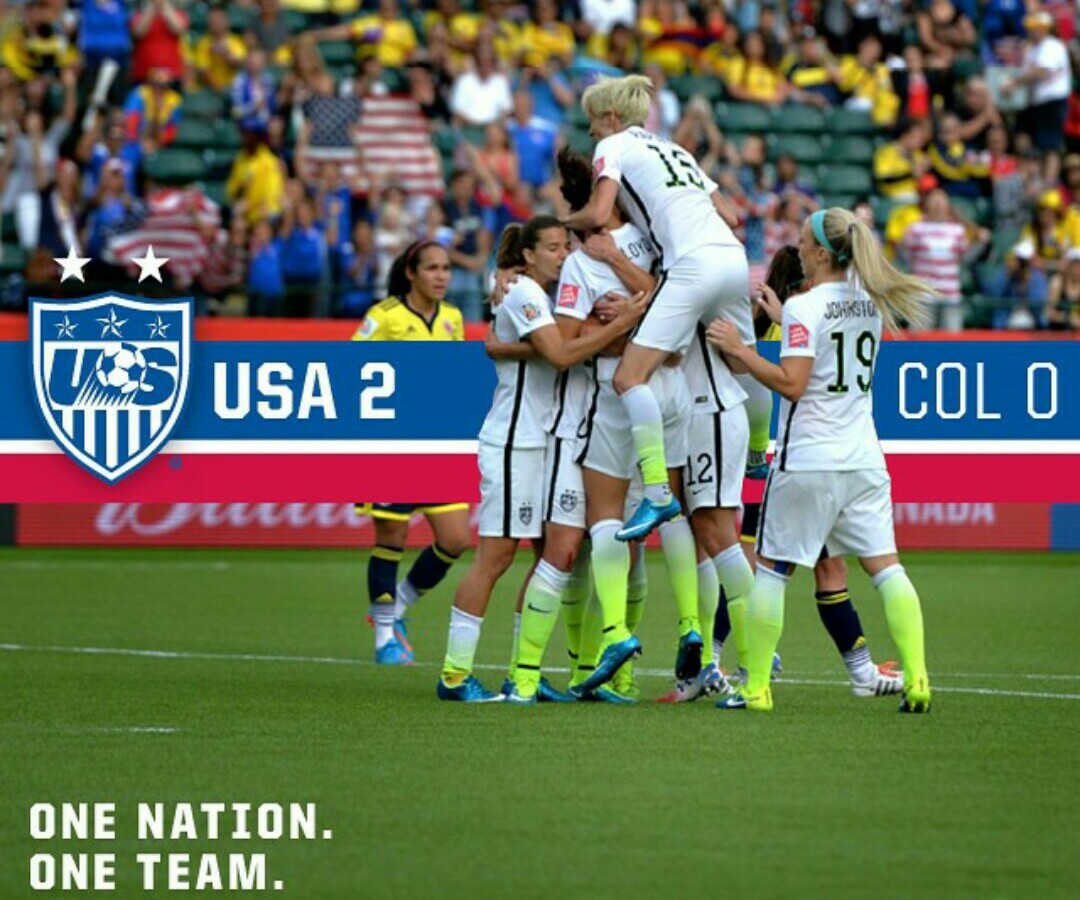 The first knockout game of the Women’s World Cup for the USA was against Columbia. I thought the Americans would outclass the Columbians and sure enough that’s what happened. Although the US offense continues to struggle, the defense has been outstanding, with its third shutout in a row.

We watched the game with our fellow American Outlaws and munched on pigs in a blanket and loaded tater tots. The local Outlaws group hasn’t been as vocal as they were for the men’s team, but it’s still a passionate fan base. We’ve got our fingers crossed for a run to the finals, but I may have to cut down on the bar munchies if I’m going to fit into my USA gear by the time the final rolls around. 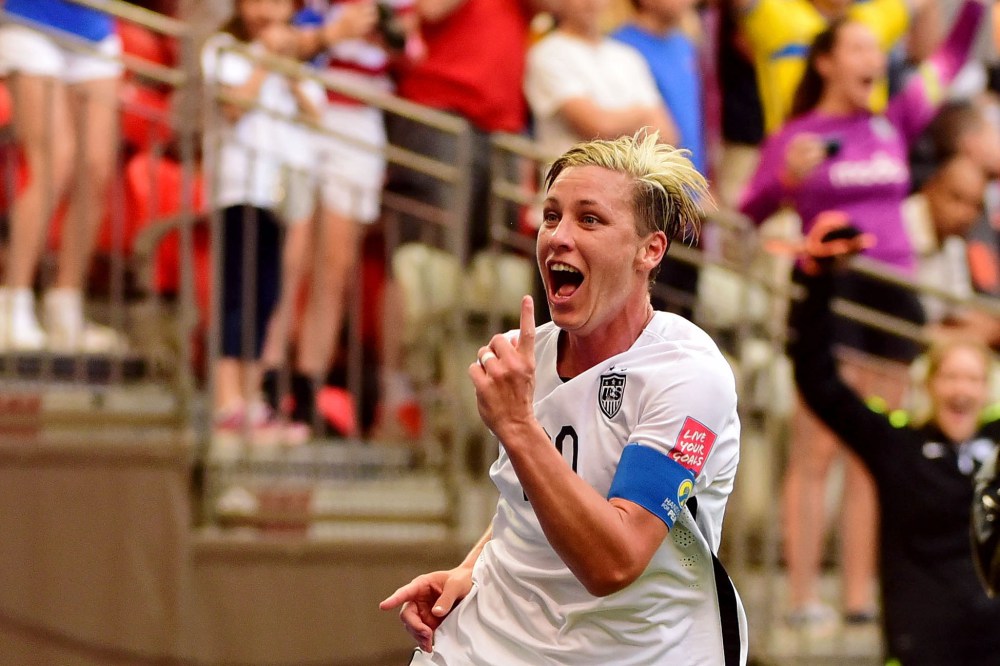 Last year my favorite World Cup hashtag was #IBelieveThatWeWillWin. This year for the Women’s World Cup, the hashtag du jour is #SheBelieves. After winning Group D, aka the Group of Death, Team USA is in great shape to go far in the tournament and bring home the Cup.