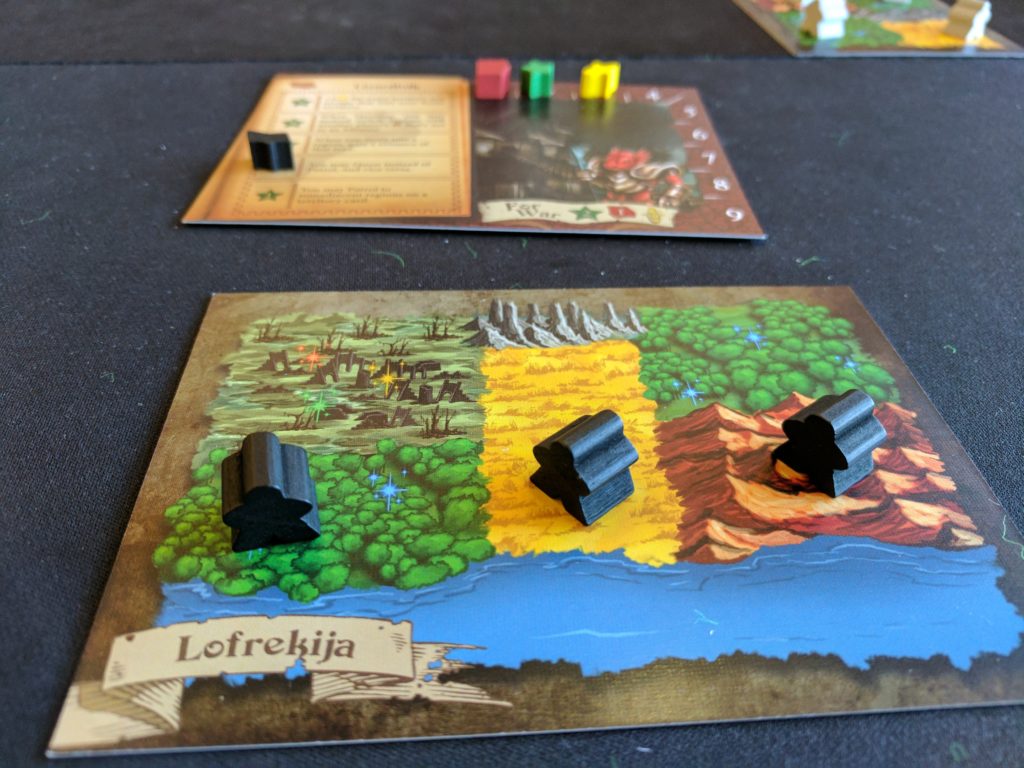 I recently crossed off another game on my Shelf of Shame: Tiny Epic Kingdoms, a 4X game from Gamelyn Games. I’m a huge fan of Tiny Epic Galaxies, so when I came across Kingdoms on sale last year, I couldn’t resist. I was excited to see if it was as good as Galaxies and it joined my stack of unplayed games. I brought it to my weekly game night a few times, but there was always something else to play so I started to look for solo variants in order to get it played.

Thankfully, my buddy Daryl said he’d be down to try it with me. Like Galaxies, Kingdoms packs a lot of game into a small box. I usually agree with Tom Vasel’s game reviews, but this time I felt like he focused too much on the “Tiny” and not enough on the “Epic” of this game. He isn’t enamored with the “tiny” part of this game series; he’d prefer these games in normal-sized boxes with normal-sized components.

Tom’s reasoning, though, is exactly why I love the Tiny Epic series: the game play far exceeds its price point. Most of us can’t afford every game we want and Gamelyn’s Tiny Epic series is an outstanding way to add solid games to our collections at reasonable and affordable prices (to be fair, at the end of his review Tom does point out the excellent value of TEK).

Tiny Epic Kingdoms is a solid 4X (eXplore, eXpand, eXploit, eXterminate) game that plays within a half hour. The 4X mechanism is typically found in longer, meatier games so it was nice to have it in such a compact format. During our first play it took some extra time to grok the rules, but it was pretty smooth sailing after a few turns.

Each player controls a faction with its own unique characteristics and abilities. They also start on their own territory card.

The active player chooses one of several actions:

After a player has chosen an action they place the shield token on the corresponding spot on the action mat. This signifies that the action cannot be taken again during this round.

Meeples produce resources based on the regions they are located on:

After the active player has completed their action, the next player chooses from the remaining actions. Play continues until all actions have been taken, then the action mat is reset and all actions are available again.

As the game progresses, players will build their tower, increase their magic knowledge, and control regions. Each of these factors will earn Victory Points. The game ends when a player places his final meeple on a region or builds the final section of his tower. The player with the most Victory Points wins.

The most interactive part of the game comes during war, when a player moves into a region controlled by another player. Each region can only be controlled by one player, so at this point each player takes a 12-sided die and secretly allocates the number of resources they are willing to commit to war. The dice are revealed simultaneously and the highest number wins the region. Both players, win or lose, pay the amount of resources shown on their dice.

Another option during war is the flag symbol on the dice. If both players set their dice to this flag, then they form an alliance, which means they will both earn resources from this region. Peace is beneficial to both players, but that peace may not last as they try to gain control of the region for the final tally of Victory Points.

I liked the two-player game; there’s a third territory added to the game called the Lost Kingdom (basically a random territory card) that both players can fight over, but it seems that Tiny Epic Kingdoms will be better with three or four players as more opportunities for wars and alliances are possible. While there isn’t an official solo game, the Heroes’ Call expansion adds one and the base game is good enough that I’ll probably buy it at some point. 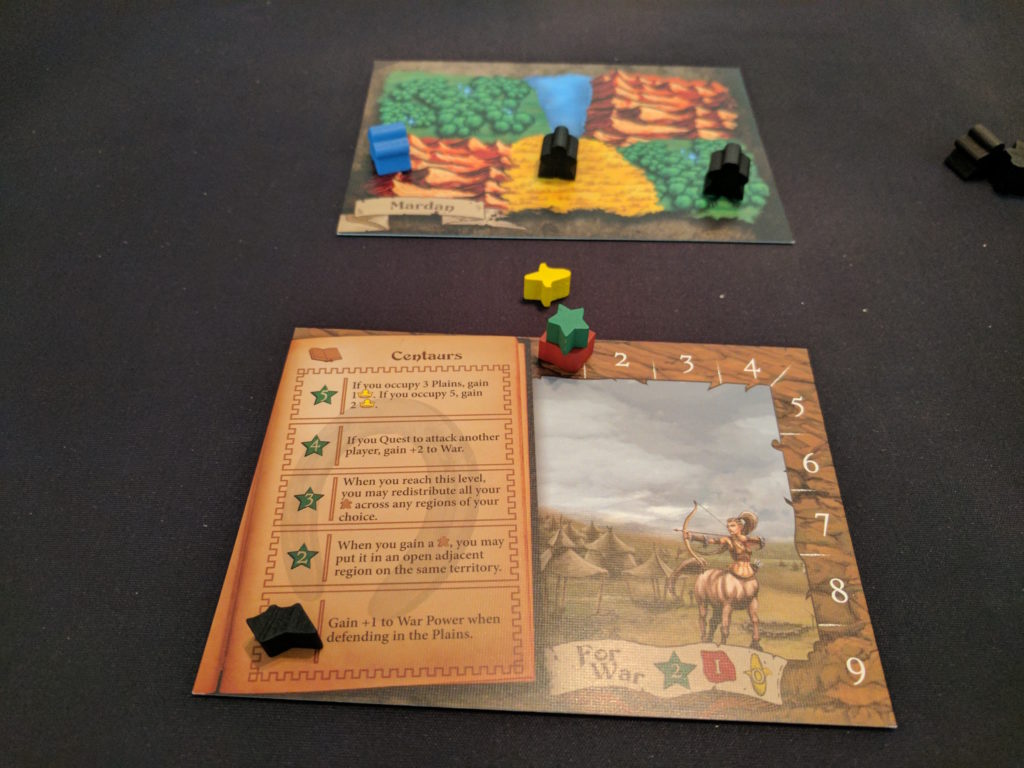 UPDATE: After I wrote this, I played a three-player game with Daryl and our other gaming buddy Graham. We also included the Search for the Crown of Valor variant, which added random tokens to regions in our home territories: treasure icon for resources, bandit icon for losing resources, and the crown icon for an additional two VPs at the end of the game. The three-player game moved quickly and there were two battles before the game was over, so I preferred it to the two-player version.