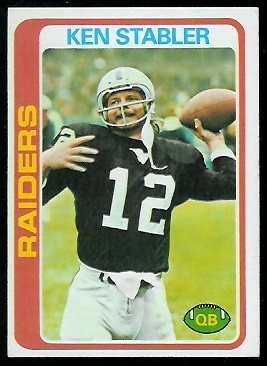 My love of the Oakland Raiders goes back to the 70s, when I would watch the team with my dad. If the Raiders were down at halftime, my dad would tell me not to worry since they were a second-half team. More often than not, the Raiders would come back and win the game, just like my dad predicted.

I was in elementary school when Ken “The Snake” Stabler led the Raiders to all of those comebacks. One of my first memories of football on television was when the Raiders beat the Chargers on the Holy Roller. At that age I had no idea what had just happened, but it was ruled a touchdown and I was excited that the Raiders had won again (the play resulted in the NFL changing its rules the following season).

It’s a shame that Stabler isn’t in the Hall of Fame. He was one of the best quarterbacks of that era and if I was on the NFL committee, I’d propose a new rule: anybody involved in more than one game with a nickname is a Hall of Famer. Stabler was on the winning team in The Holy Roller, the Ghost to the Post, and the Sea of Hands.