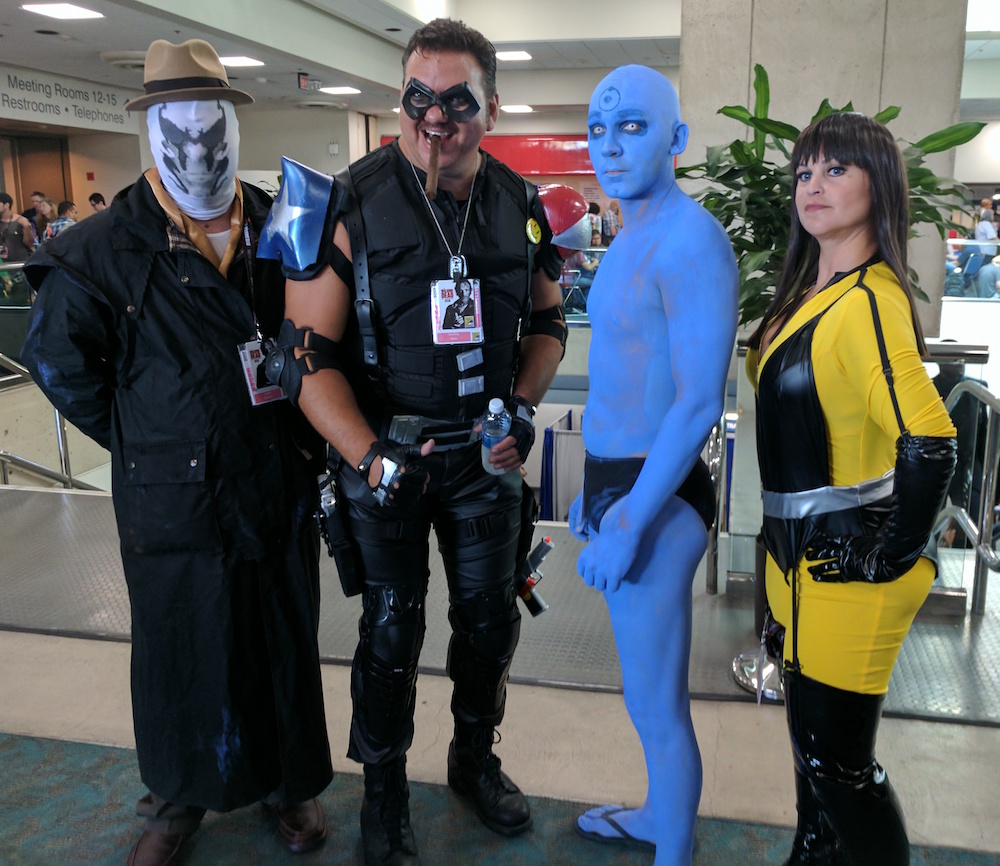 I’m constantly impressed by the cosplay at modern comic conventions. From the carbon copies of superheroes, to the wacky hilarity of pop culture fun, to the imaginative mashups of two (or more) genres: people’s ingenuity never ceases to amaze me. This is the second of a three-part series highlighting a few of the cosplayers at SDCC 2017. Part one is here.

Pictured above: The Watchmen, minus Ozymandias and Nite Owl.

After Preview Night on Wednesday and the first official Con day on Thursday, Friday was much busier. Cosplayers were everywhere at the Super Bowl of comic conventions.

I started going to the Con in the ’80s, so it blows my mind to see how ginormous the event is these days. Not only is it the entire convention center, but the surrounding hotels and Gaslamp Quarter as well. While it’s entirely overwhelming, it’s also cool to see the entire city all geeked out. 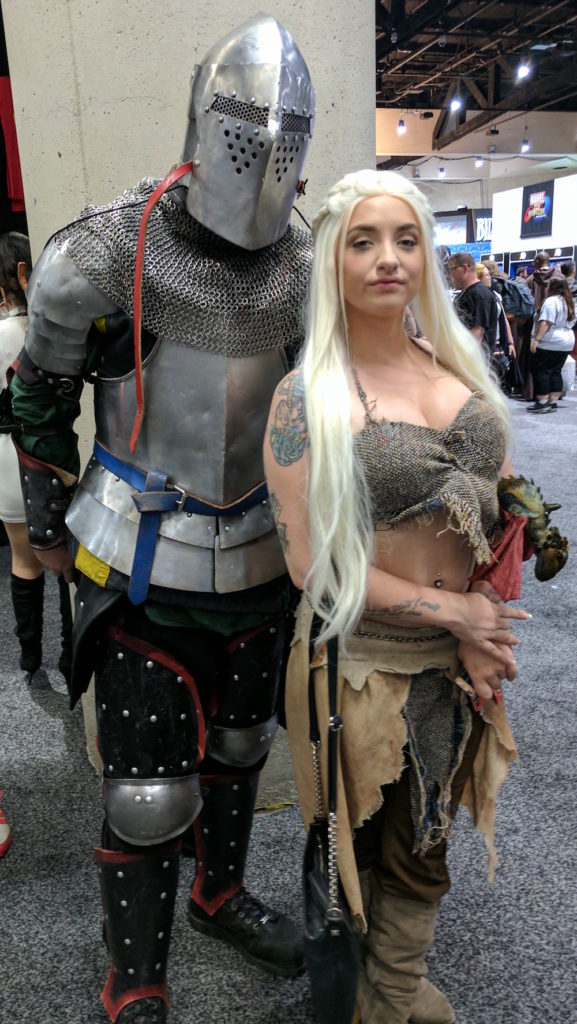 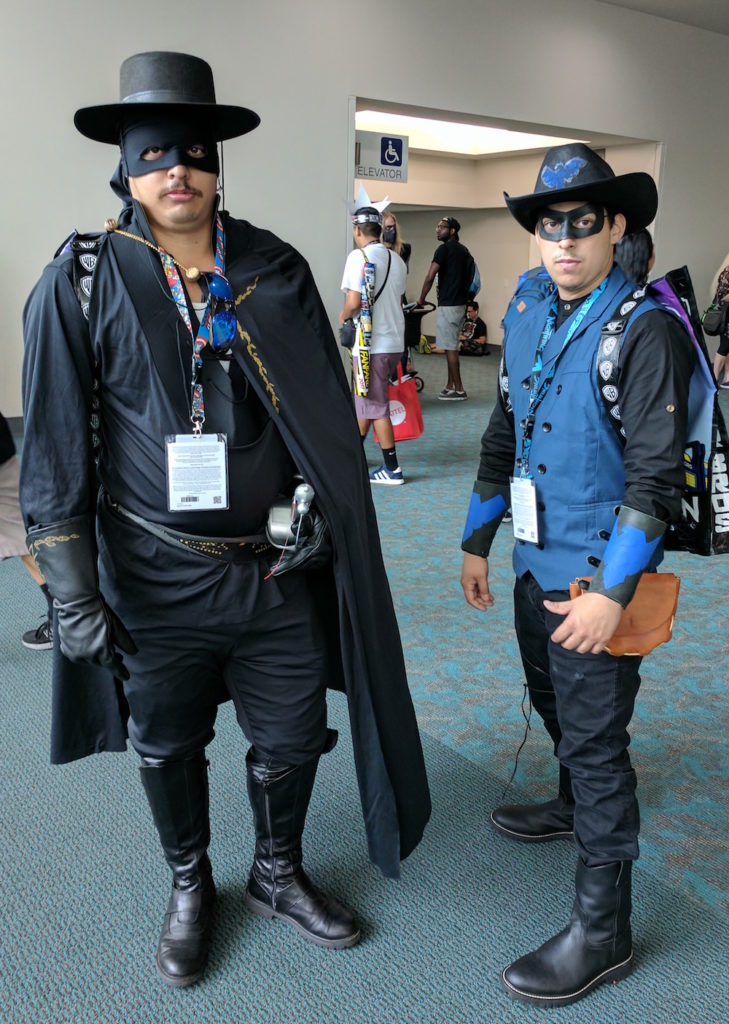 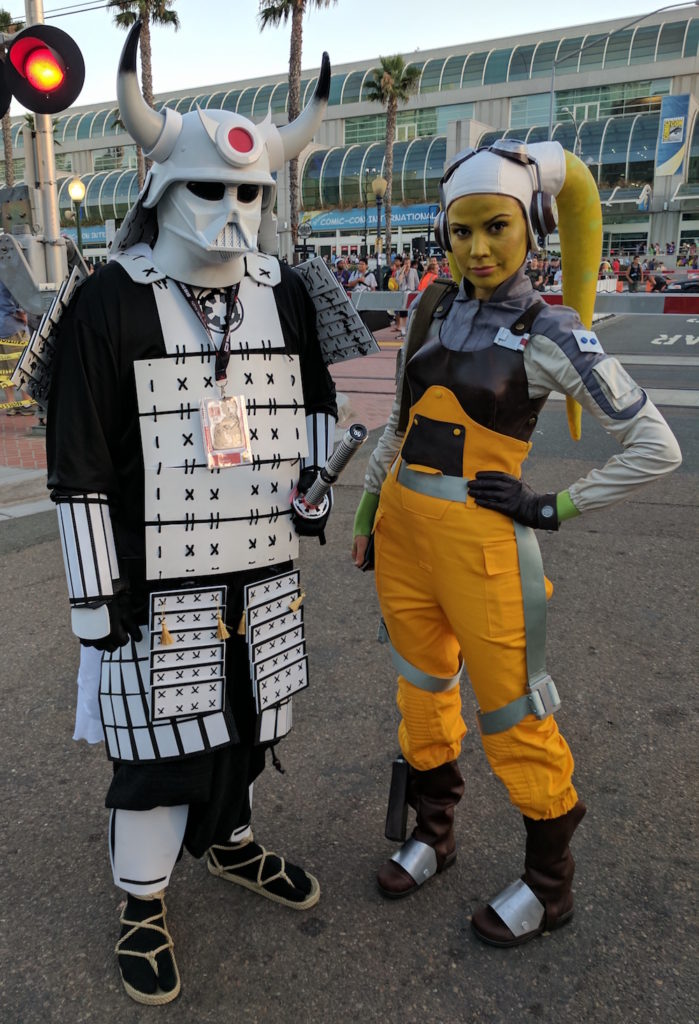 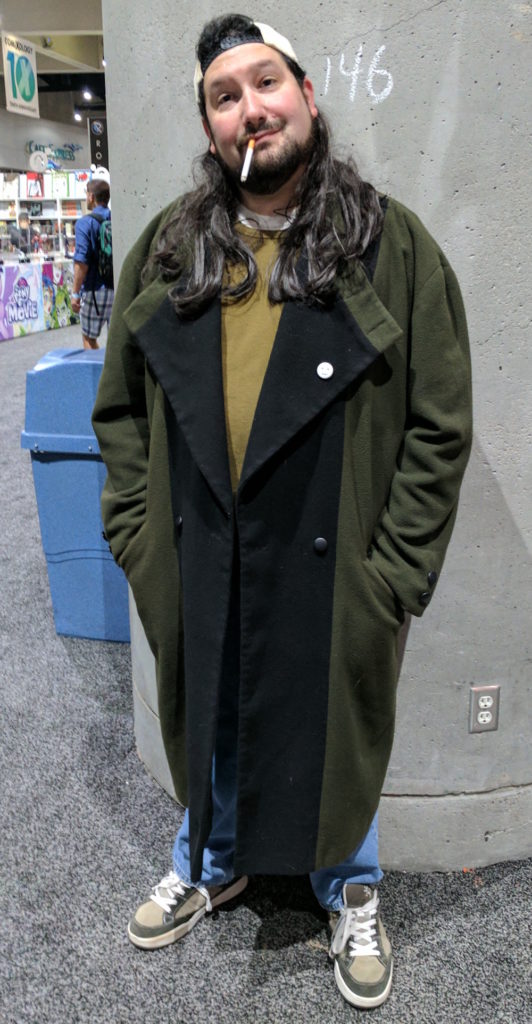 Family cosplayers are the best! 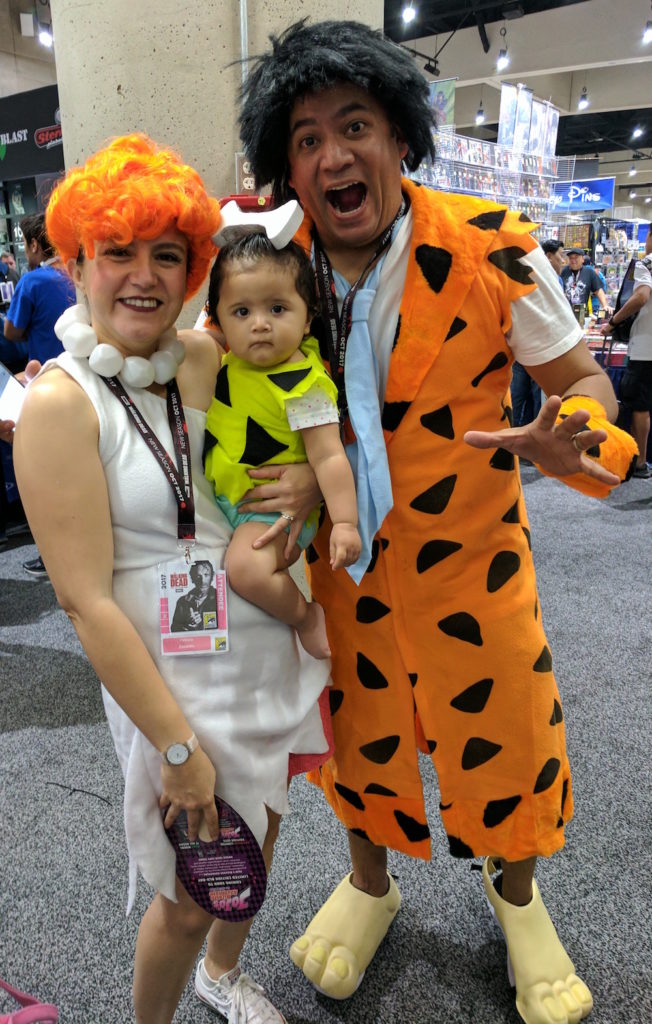 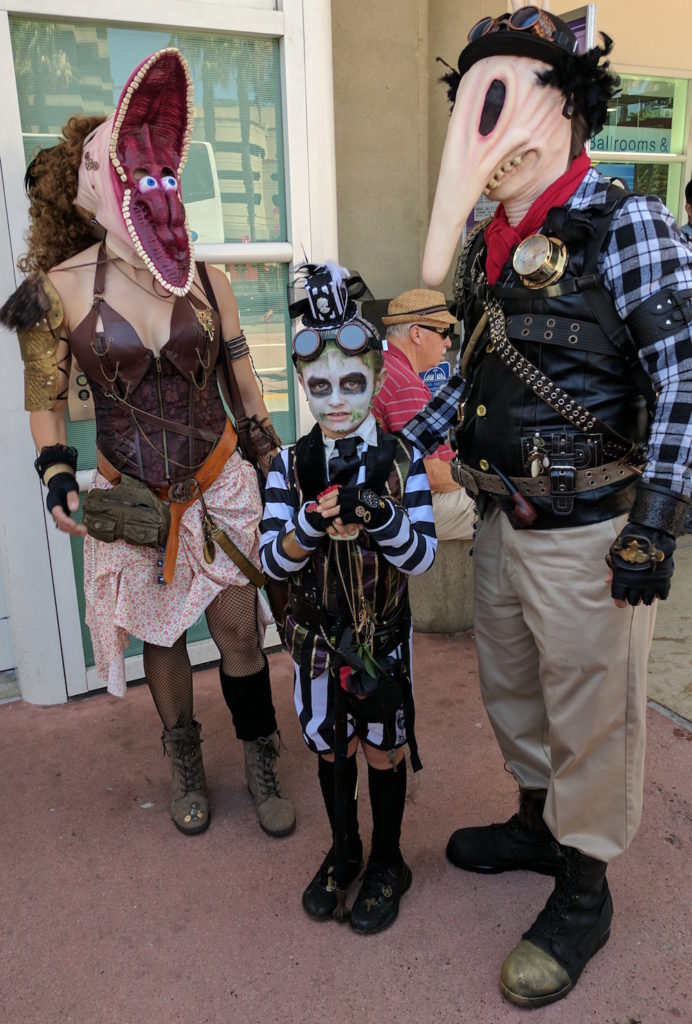 Even when one of the family members is over it …

Next up: Cosplay Saturday 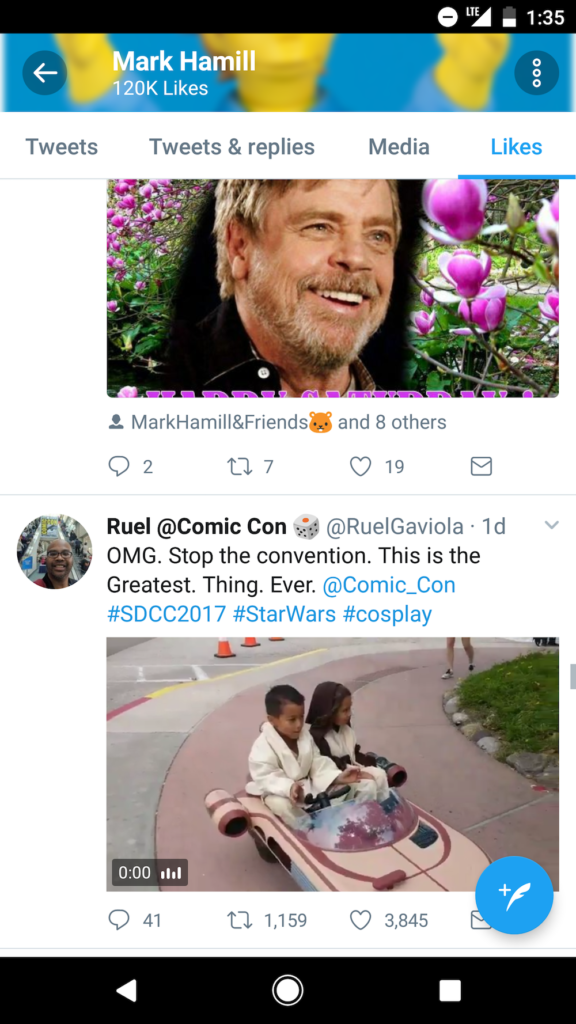 So, the video I posted of the kids in the mini landspeeder yesterday went viral.

My tweets typically get a few likes and, if I’m lucky, a retweet or two so this was totally unexpected. This particular tweet has deluged my phone with nonstop notifications and as of Saturday 7/22/17 at 4pm it’s been liked over 4,000 times and retweeted over 1,200 times.

It’s been interesting seeing how people have reacted to the video. Obviously, cute kids in their Star Wars costumes will usually generate lots of likes. Kudos to them (unfortunately, I didn’t actually meet them) for being good sports and to the Radio Flyer company for making such as amazing vehicle.

One cool thing about the video going viral? Getting a Twitter like from the man himself, Mark Hamill (shown above).

This has been the Best. Comic. Con. Ever. 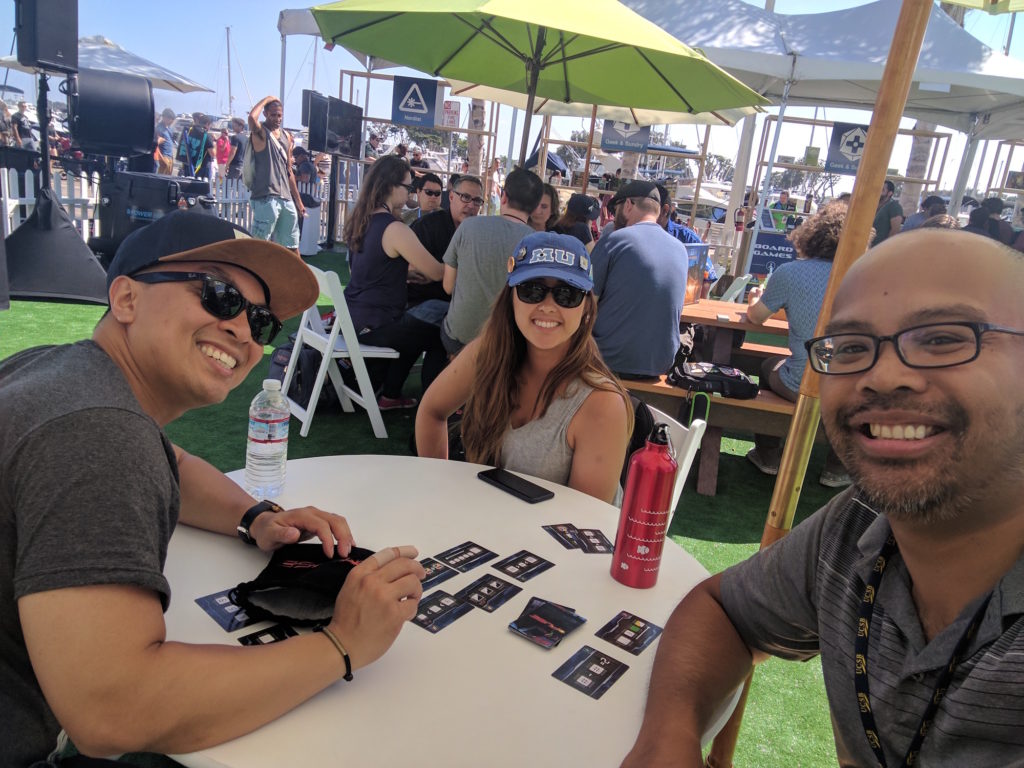 I got to spend some quality time at Conival, the big bash hosted by Legendary Entertainment’s Nerdist, Geek & Sundry, and Alpha. The lounge was outside on the Marina Terrace behind the Marriott and it was an ideal location overlooking the water.

Even though San Diego is known for its mild weather, it can still be pretty tough being in the sun all day and thankfully there were plenty of shaded areas, misters, and two huge fans to keep everybody cool.

I loved that Conival was outside: it made for a nice change after being engulfed by the sweaty masses inside the convention center. And what better way to enjoy the great outdoors than by playing board games?

My friends Marlon and Julla met me at the lounge and we played FUSE and Wits and Wagers. We shared a loss and a victory in FUSE and were awarded some terrific freebies: books and a book bag.

In Wits and Wagers I eeked out a single-point victory, thanks to the final question, which couldn’t have been more perfect for the setting: “What year did Superman first appear in comics?”

While you Google the answer to that (here, I’ll help you), I’m going back to the con for more gaming and what-not. 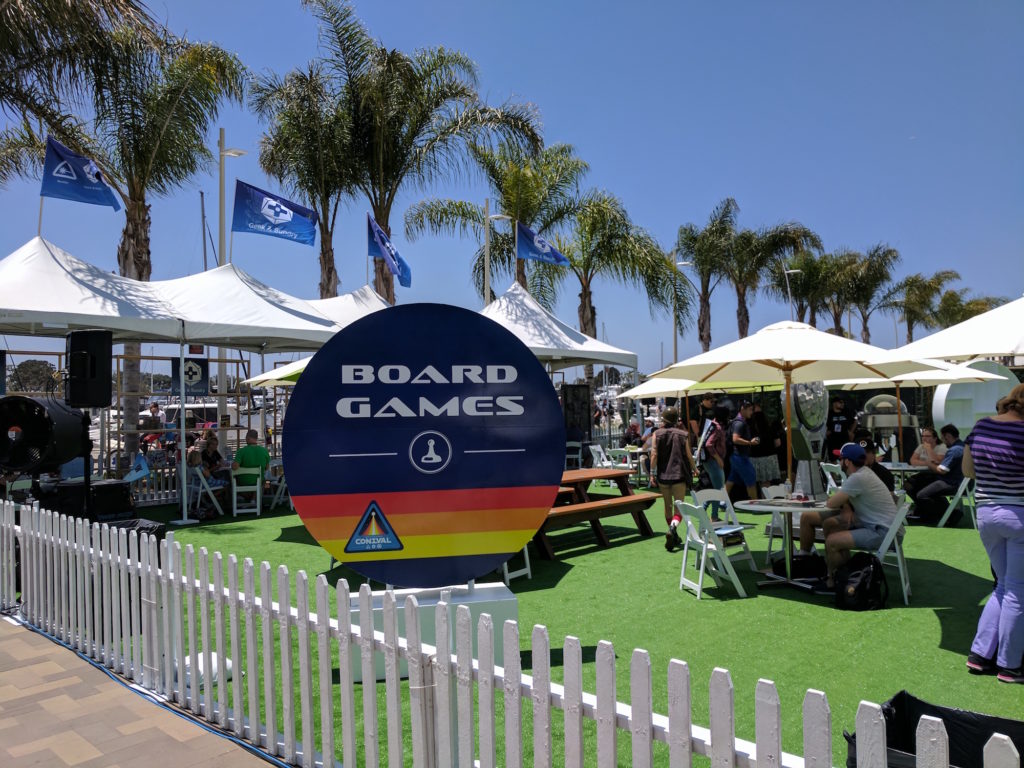 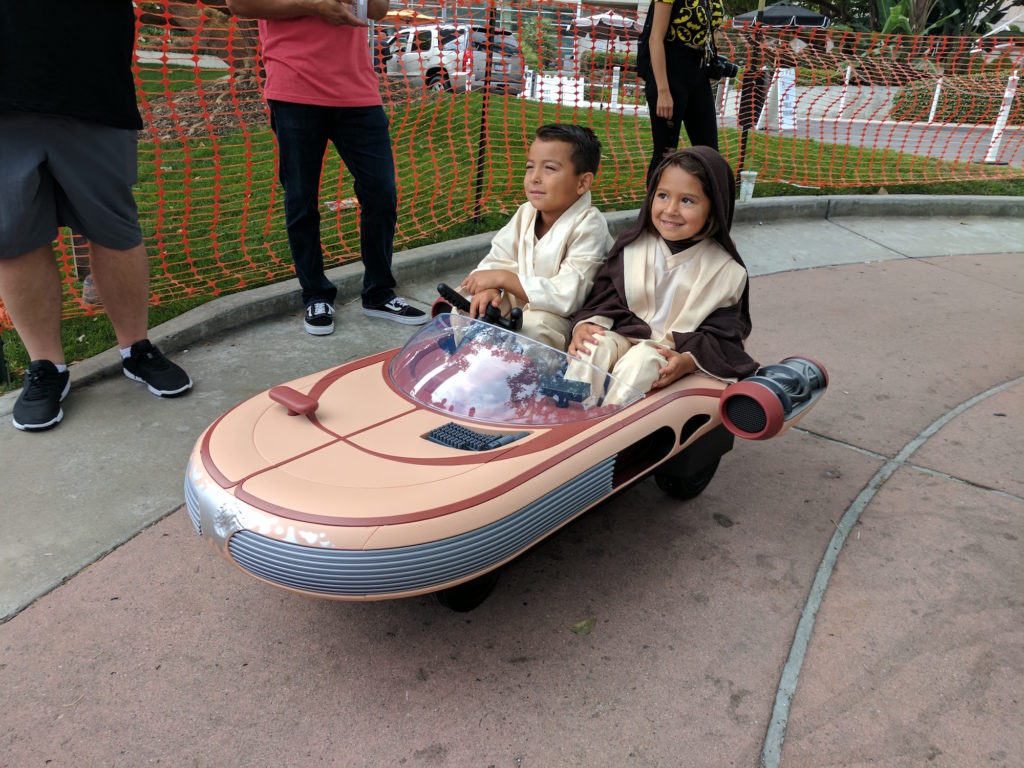 Wednesday (Preview Night) and Thursday at SDCC ’17 were fantastic. I’ve met some people on my Must Meet List and I was fortunate to connect with friends from back home and an old friend from across the country.

(Pictured above: the cutest FULLY WORKING mini land speeder outside the convention center. Seriously, just stop the con now. That was the best thing ever.)

Crowds tire me a lot more now than when I was a younger man,  but like so many of my fellow attendees I feed off the energy of the crowd. It’s fun being among so many fans of so many different geekdoms. Admittedly I’m not up to date on all of the latest trends (still haven’t seen Rick & Morty, despite hearing how great it is from everyone I know), but I dig seeing everyone’s respective obsessions. 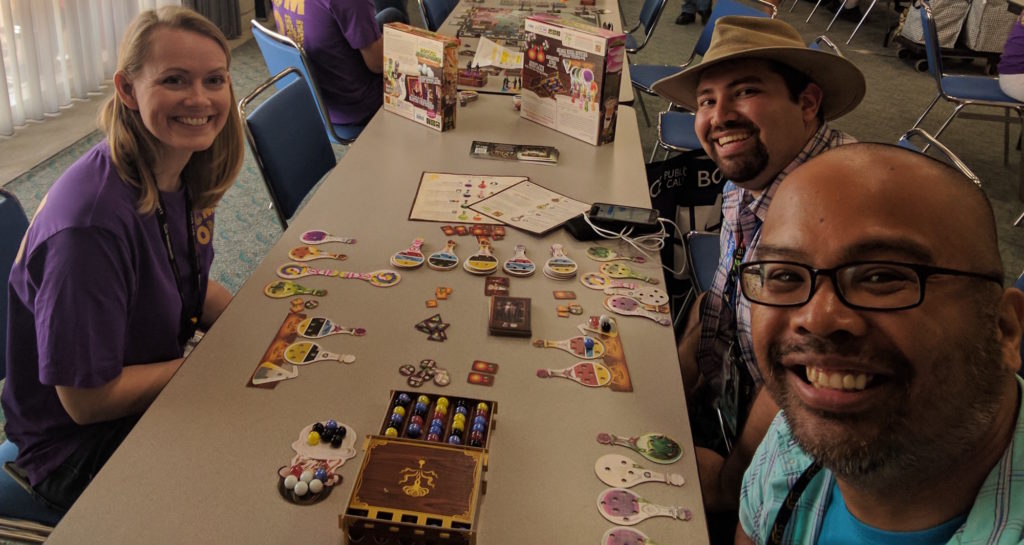 While the first day and a half were spent exploring all the different nooks and crannies of the main exhibit hall, I also managed to briefly check out the Conival put on by Nerdist and Geek & Sundry. I’ll be revisiting it later today and will post another report soon.

I also checked out the board games area on the mezzanine, where my buddy Oscar and I got to play the new Potion Explosion expansion, The Fifth Ingredient. CMON demo-er Kimberly explained the changes and we got into a game, which was a blast (fans of the game will get that pun, ha!).

To be continued. If you’re here and want to meet up to play a game, tweet me!