This is Day 5 of my Game-and-Blog-Every-Day-in-November Challenge. Search my blog for “Daily Game Challenge” for previous entries. 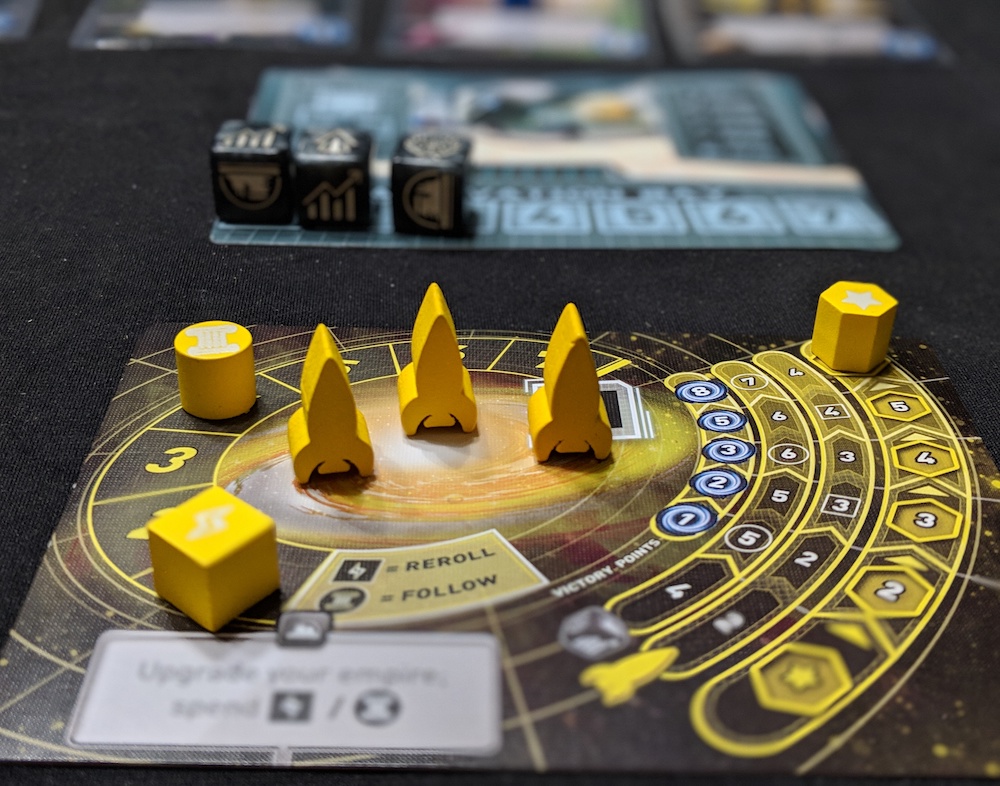 It’s no secret how much I love the Tiny Epic series of games. I’ve raved about them here, here, and here.

Tiny Epic Galaxies is the game that got me hooked on the Tiny Epic games. It’s got dice chucking and set collection wrapped up in a sci-fi theme: three of my favorite things.

Since Galaxies was published, all of the Tiny Epic games come with solo rules, which makes it easy to take these portable games anywhere to get your board game fix. Tonight I needed a quick game to unwind and 20 minutes of Tiny Epic Galaxies was just what the doctor ordered. I defeated the medium-level Rogue Galaxy, Zendica, and now I’m ready for bed. 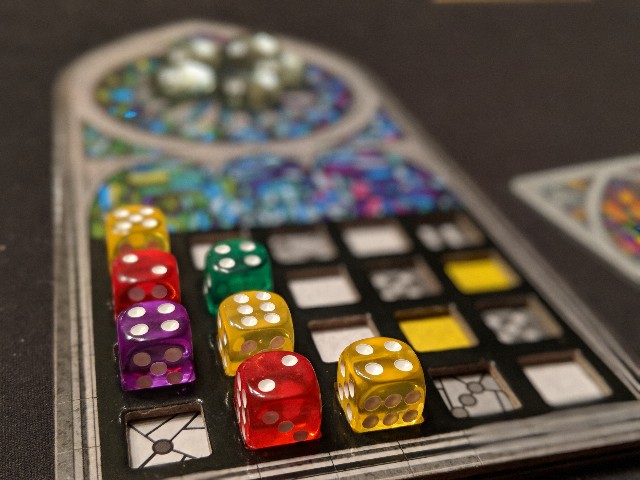 Last week I completed my 5×5 solo game challenge! This was inspired by the yearly Board Game Geek 10×10 challenge in which BGGers try to play 10 different games 10 times within a calendar year. I’ve successfully done that challenge the last two years and I’m over halfway done with my 10×10 for 2018.

Some people ask why, as if there’s something wrong enjoying a board game by yourself. I get it, though; they want the thrill of competition or the camaraderie that comes with sitting at a table with others.

Years ago my wife and I would occasionally spend an evening working on a jigsaw puzzle. In fact, it was with her that I actually completed my first 1,000-piece puzzle. It was something I’d never tried to do or thought would interest me, but it was a totally satisfying experience. We wouldn’t complete the whole thing in a night, but we’d work on it throughout the week, sometimes separately whenever we had a spare moment. Once it was done, we’d start a new one.

In a sense solo board games are like jigsaw puzzles for me. It’s just me trying to figure out a way to win or score the most points. There’s no pressure to act quickly or watch what others are doing. And if I want to leave midway through a game, that’s perfectly fine. I can finish the game the next day or the next week or whenever I feel like it.

Other friends who aren’t into solo games always mention that they’d rather play video games by themselves instead of a board game. I always respond the same way: “Great!” If that’s your form of entertainment, more power to you. Personally, since I’m on the computer and/or checking my phone most of the day, the last thing I want to do to relax is something that requires electronics.

No, I prefer analog entertainment to wind down the day. Give me good ol’ cardboard, dice, chits, cards, pawns, etc., and I’ll enjoy an hour or two at the tabletop. 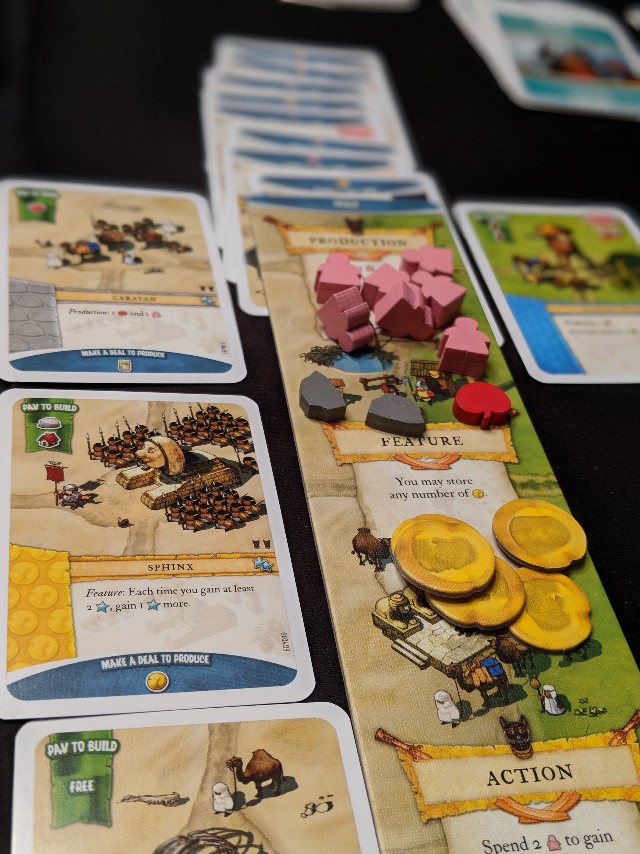 Here’s a quick look at the five games I solo-ed five times (or more) this year:

1. Cat Rescue. I liked Ta-Te Wu’s cute cat-themed game that he successfully Kickstarted this year. It was this neat little puzzle that only required 15 minutes to play. Funny, AEG came out with Cat Lady a few months later that reminded me of his game.

2. Dice Stars. Thanks to my Board Game Twitter buddy Odin Phong I was able to score a copy of this Bruno Cathala dice game. I can knock out a solo game in under 10 minutes and I love how tough it is; I’ve only won 4 times out of the 13 games I’ve solo-ed.

3. Imperial Settlers. I joined my first online solo league and it was a blast! A bunch of us BGGers signed up for the four different base game factions and we battled it out for a few weeks until one faction was standing. I joined the Egyptians since that was the faction I had the least amount of experience with and even though we were the first to be eliminated, I learned a lot.

4. NMBR 9. I borrowed my friend’s copy for a week and my wife and I enjoyed this game a lot. It reminded me of those jigsaw puzzles we’d work on together all those years ago. It’s more dynamic than a standard puzzle, though; the tiles are randomly drawn every game, creating a new challenge every time. When my wife and I weren’t playing, I’d sneak in solo games that could be finished in about five minutes.

5. Sagrada. Until Azul came along, Sagrada was the puzzle-style game that everybody was talking about. It’s funny how the Cult of the New works; sometimes if seems like games have a shelf life of a week before something else is all the rage for the next week. While Sagrada did get a lot of love when it first came out, it seemed to lose some of its luster when Azul showed up. I still find this dice-roller to be a lot of fun at any player count and the solo game is hard. I only won once in eight tries for this challenge so it looks like I’ll be dusting off Sagrada soon to redeem myself.

I get my love for solo games from my mom. She loves playing solitaire (almost exclusively Klondike) and doing jigsaw puzzles. As far as I can tell, she was never into the competitive aspect of card or game playing (unlike my dad, whose love of cards and poker was passed down to me and my brothers).

Within my circle of gaming buddies, I’m one of the few that enjoys playing board games by myself.  Whenever I mention my love of solo gaming, I usually get one of two responses:

Sometimes I want to be snarky in my reply: “Well, I like playing games with others, too. It’s why I’m at game night. Duh.”

As for opting to play a video game: yes, it’s easier and faster to play games on my smartphone or laptop, but I find it more enjoyable to be at the tabletop with an actual board with real physical bits and pieces.

Much like doing a jigsaw puzzle, playing a board game by myself is a form of meditation and relaxation. I like quietly taking turns and trying to find a way to win or post the highest score possible. I like being away from my phone and computer while I’m at the tabletop. I like the feel of those dice, cards, and tokens as I pass the time before my next “real” game with others. And I like not feeling rushed to do anything during a solo game. Everything is done at my pace: win, lose, or draw. 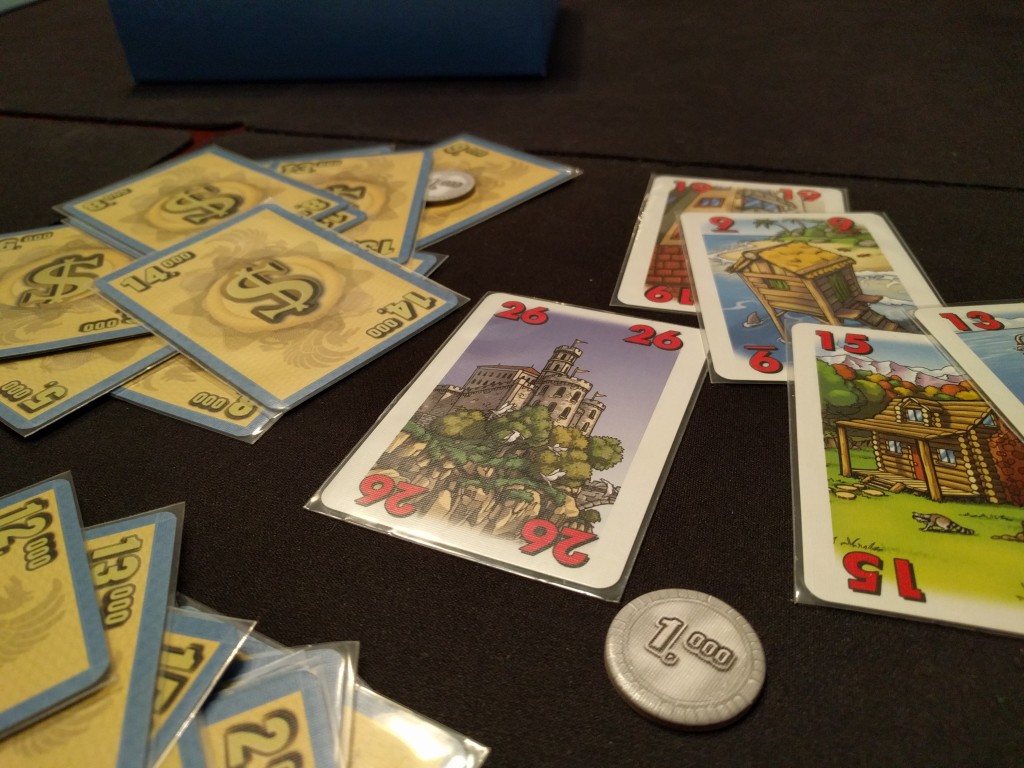 While getting ready for #GenCantSoloCon (here’s my schedule of games for this weekend) I wanted to see if there was a solo variant for one of my favorite filler games, For Sale. A few clicks and clacks on boardgamegeek.com and I can now play For Sale by myself.

For Sale is an auction-style game played in two rounds. During the first round, players bid on properties (numbered 1-30). A few properties are dealt out and players begin the auction by using their allotted amount of money tokens.The highest bid takes the current highest property, with the second highest bid taking the second highest property, etc. A player can drop out of the bidding at any time and receive half of their bid back along with the current lowest property. They can also pass (i.e., not bid on a property) and take the current lowest property for free. This process is repeated until all properties have been bought.

In the second round, players try to sell their newly acquired properties for checks (valued at $0 to $15,000). This time, the checks are dealt out and players secretly choose one of their properties. After everybody reveals them, the highest valued property earns the current highest valued check, the second highest property earns the second highest check, etc. This process is repeated until all properties have been sold. The player with the most money at the end wins.

For Sale is always a hit whenever I play it. It’s a fantastic quick play that also makes for a great introductory game for new board gamers.

Here’s the link to the original post of the solo play rules. And here’s my rewritten version; the technical writer/editor in me couldn’t resist streamlining the text and making things more consistent and orderly.